Posted at 09:47h in CNC Trimming, Services by Tomas Lima 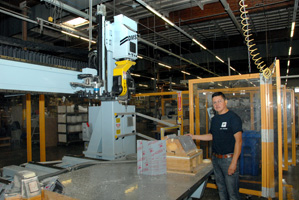 Five-axis CNC trimming produces parts with repeatable, close tolerances. There are several ‘keys’ to achieving consistent and accurately trimmed parts, but first a description of the equipment and trimming process.

CNC trimming equipment has been described as a ‘Computer controlled router’. This simplistic description does not do justice to the extensive capabilities of this important element in creating precision thermoformed parts. In addition to routers, trimming tools include end mills, circular saws and drills. Countless subset variations of these tools are used to overcome the most complex challenges of part trimming.

Plastic part trimming can be done on Five-axis as well as Three-axis trimming centers. Tru-Form Plastics uses only Five-axis CNC’s to trim thermoformed parts. The Five-axis are identified as X-Y-Z (length-width-depth) with two additional degrees of freedom sometimes referenced as C & B.Tru-Form Plastics Five-axis trimming centers are 5’x10′ with 28″ of Z axis clearance. The table size is either 5’x10′ solid or two 5’x5′ tables that can act independently for load/unload, or ‘slaved’ to act as a solid table.

As previously mentioned, thermoformed parts can be produced on either male or female forming tools. It is critical that the CNC trim fixture always duplicates size/configuration of the part’s forming tool. In other words, the trim fixture will look identical to the forming tool. The next key is to hold the part securely and immobile while it is being trimmed. Tru-Form Plastics accomplishes this by use of a vacuum system to lock the part against the trim fixture. The vacuum lock down system is so positive that additional clamps or nests are rarely needed. This allows full freedom for trimming on the non-tool side of the part. Parts formed on female tools can utilize formed features that are then CNC trimmed open so the trimmed surface is not visible from the outside of the part.

Part design revisions involving trimming can be easily accomplished with a CNC program change. Similarly, multiple part configurations can be generated from a single formed part by different trim(s).